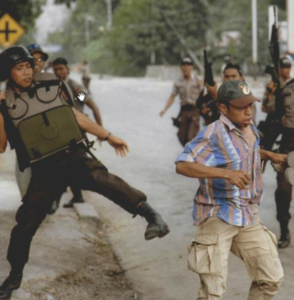 CAGE is a short tense piece set in the hills of East Timor during the last invasion by Indonesia. It is a three-hander set in the early hours of dawn – a young Australian soldier (part of the UN presence) has been given the task of guarding an Indonesian colonel while his platoon go for more help. The colonel, who is imprisoned in a chicken coop made into a makeshift cage might or might not be responsible for a massacre in a nearby village. A young East Timorese widow approaches the cage claiming the colonel gave the orders to execute her husband. She tries to persuade the soldier to kill the colonel who she’s convinced will get away with the killings. Meanwhile, as the sun rises the colonel’s own men drawn closer and closer determined to free their colonel. Will the soldier and the widow kill the colonel or not? Is the colonel really responsible for the massacre down the hill or not? Is the widow who she claims to be?